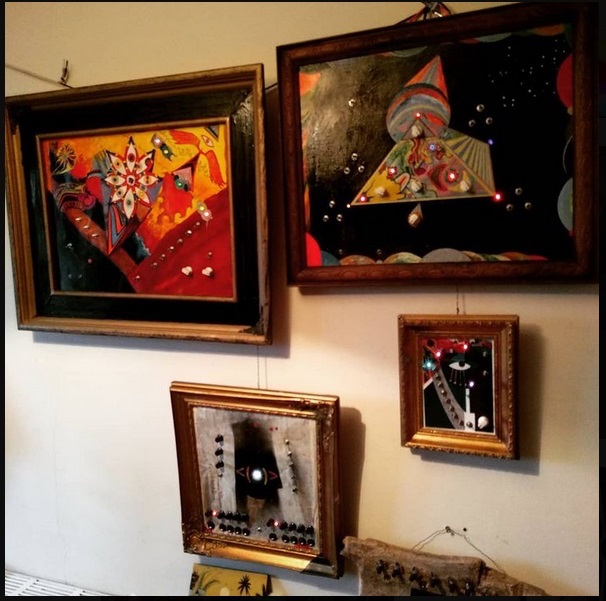 London
3 of the paintings - 'Transmutation Pyramid', 'Drums of Eye' & 'Psycasso' are plugged into the mixer painting - 'Paint Mixer' which in turn mixes the levels & adds delay effect to the sounds.

The project began around 18 months ago.

I made it as live performance was out & a general interest in mixing art & sound.

I have used paintings I painted anywhere from now to 18 years ago.
1st painting was named 'Transmutation Pyramid' & has a 4 osscilator synth with many multi coloured LEDs, the title is taken from my thought process in 2003 & an interest in ancient egypt/chakra system.

2nd is named 'Drums of Eye' & has a drum device with 10 step sequencer.

3rd is named 'Psycasso' due to the Picasso style print used, a harsher sound is created with the synth fitted to it.

4th is the 'Brain Mixer' which all the other paintings are plugged into, it also has a delay effects so the sounds can be affected.
Damian Lintell-Smith : Artist 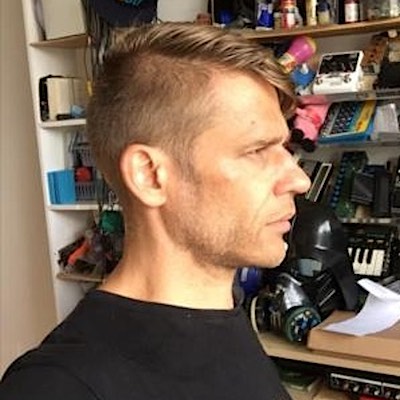 London
I am independent/self employed & make a living from creating /selling my creations.
I also perform with circuit bent/rewired games consoles/drum machines/synths/camcorders, something other than the obvious is mostly preferred.
Connect with Damian Lintell-Smith
How I can help you:
I frequently answer questions on building, hacking & circuit bending, If I can help I message them back.
How you can help me:
follow me on Instagram, patreon, social media
buy devices from my Etsy shop
Become a member to post comments or questions to this maker.
If you like this project, please make a small donation to the artist.
If you liked this project, please make a small donation to the artist.
The information and media presented for this project was provided by its creator. The maker owns and has copyright on all materials submitted. The maker retains all intellectual property rights, including copyright, patents, and registered designs.
The Maker Music Festival © 2018 -2021 • All Rights Reserved