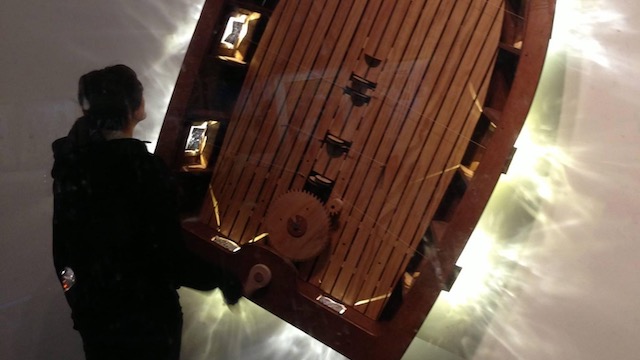 SF Bay Area
Paddling across a body of water initiates a symphony of reactions as waves propagate from the sides of the boat, fish dive away from the bow, eddies drift in the wake, animals ashore react, birds respond. In the distance life returns to normal but it has been inexorably changed, however slightly.

We Are Everything We Are Not is a reflection on the nature of our personal and collective meanderings. It is a response to the self-oriented lens through which we tend to view the world. Our actions often have implications far beyond the span of our attention and the reach of our vision.

The piece is meant to encourage us to broaden our attention to encompass both the intended and hidden consequences of our endeavors. But primarily, it is meant to be a delightful and thought provoking encounter.
Walter Kitundu : Sound artist, installation artist, and inventor
Walter Kitundu is a sound artist, installation artist, and inventor of original musical instruments that navigate the boundary between live and recorded performance. His most recent project was a 27 foot long, bird-themed, interactive, hand built, musical mural commissioned by the San Francisco Arts Commission for Terminal Two of the San Francisco International Airport.

Walter Kitundu has been affiliated with the Exploratorium Museum of Science, Art, and Human Perception since 2003, where he is currently a senior designer. His work has been exhibited and performed at such national and international venues as the Singapore Science Centre, the Gunnar Gunnarsson Institute, Iceland; the Walker Art Center, the Museum of Craft and Folk Art, and the Aukland Arts Festival in New Zealand. In 2008 he became a MacArthur Fellow.

Kitundu received a 2005 Creative Work Fund grant in performing arts to collaborate with Kronos Quartet, creating original phonoharps and composing a work entitled Cerulean Sweet, dedicated to Sally Wingwall and using elements of sound drawn from jazz great Charles Mingus. Walter Kitundu’s phonoharps are hybrids of turntables and stringed instruments —at once highly sculptural objects and functional instruments that are surprisingly versatile in performance. Cerulean Sweet premiered at Carnegie Hall in March 2006.
Connect with Walter Kitundu
Become a member to post comments or questions to this maker.
The information and media presented for this project was provided by its creator. The maker owns and has copyright on all materials submitted. The maker retains all intellectual property rights, including copyright, patents, and registered designs.
The Maker Music Festival © 2018 -2021 • All Rights Reserved