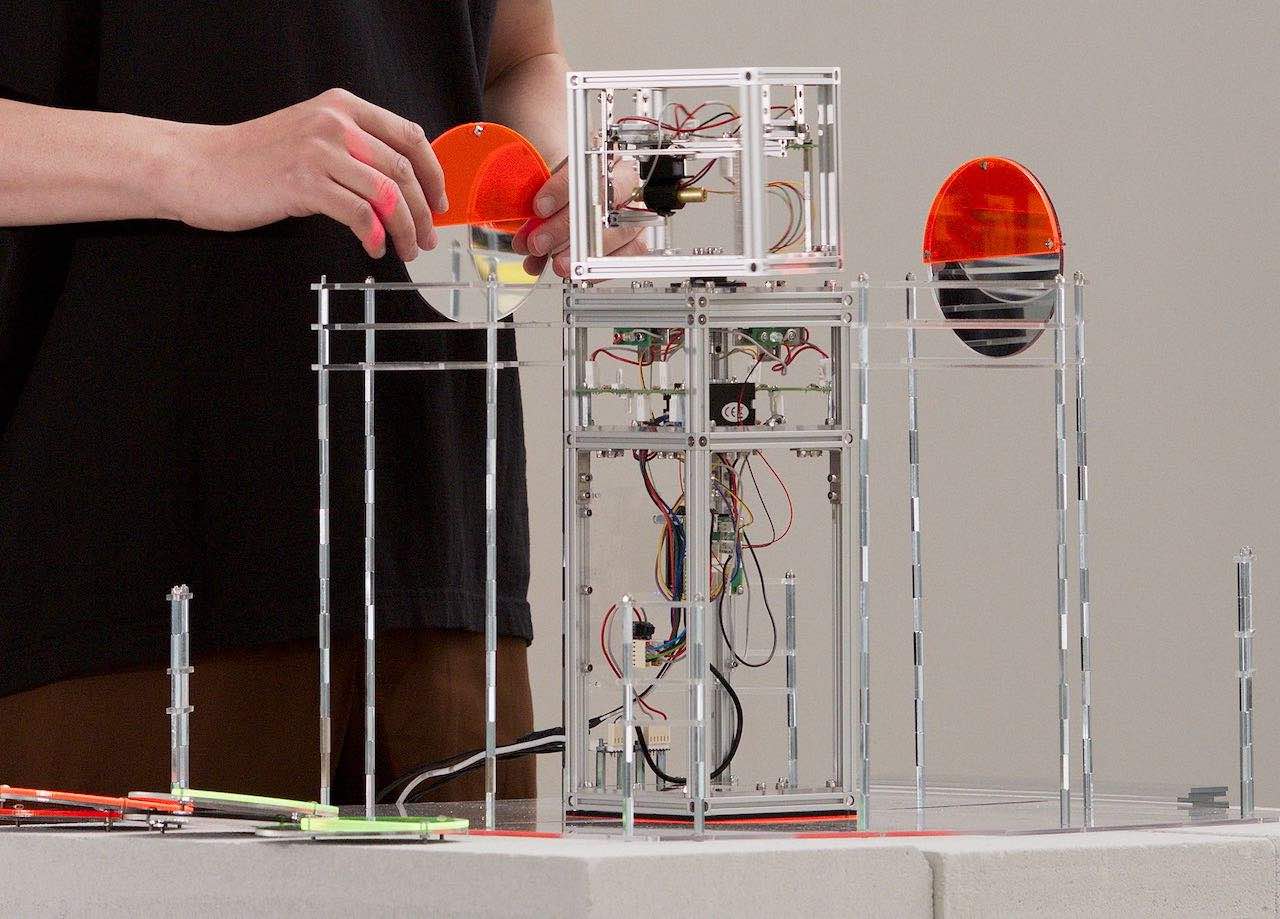 UVTOWER is a generative musical system made of lasers and mirrors which reflects on the notion of growth through sound and interaction. The flow of the rhythm is traced in a circle by a laser beam situated at the top of a tower. The laser’s reflection in the mirrors which surround it symbolises the system reflecting on itself and results in the creation of metaphoric echo chambers which scale-up exponentially to the point of making the system collapse and start anew. Adding and removing mirrors leads to the system generating denser/faster or rarefied/slower music structures prescribing its build-ups and falls.

From a technical perspective UVTOWER could be described as a musical sequencer made of lasers and mirrors which explores rhythm in electronic music through structural and sculptural relationships. Mirrors mark the beats at different positions around the circle. Adding and removing mirrors leads to the composition and performance of physical and musical structures. The project challenges notions of musical time and sequencers by offering alternative ways to compose and perform mutating patterns. The general aesthetic of the installation and sound design is informed by sonic objects from Hardcore and post-rave cultures.

Performers interact with the installation by reflecting the laser beam which rotates on the top of the tower. Reflections are caused by installing the mirrors on top the sculptural stands. Each time that the laser beam is reflected an event is recorded by the system. Depending on the number of events detected over a rotation the system decides whether to increase or decrease the speed of rotation as well as what sounds it should produce and their characteristics.

The tower hosts six light dependent resistors. One sensor is located on the spinning portion (sensor A). Four additional sensors are placed one for each side of the tower (B,C,D,E). Sensor A is able to detect reflections coming from any mirror positioned in the structure (including the mirrors on each angle of the installation). The other sensors can only detect reflections coming from a mirror positioned in front of them.

The signal captured by the sensors informs a custom algorithmic composition written in PD and running on Bela. The software maps sensor information to mechanical and sonic behaviour. On the mechanical side, depending on the number of reflections detected at each spin of the tower, the system decides whether to increase or decrease the speed or rotation.
Andrea Guidi and Giacomo Lepri : Instrument Builders, Musicians and Researchers
London, UK and Barcelona, Spain
UVCORE (IT/GB) is a music project of the Italian producer, and music researcher Andrea Guidi. UVCORE focuses on exploring and collecting sonic objects from Hardcore and post-rave cultures. Drawing influence and remediating these elements UVCORE makes installations and music to reflect on the contemporary age and to move toward alternative futures. Since the project’s origin they have presented the installation DATA DREAMING (2019), and installation/performance UVTOWER (2020) both for the international art event ARS Electronica (AT). Both artworks explore time stretching-compression and circularity in human experience. UVCORE’s first track RIVIERA has been included by the London-based label TREMORS in the compilation GLOBAL UNITY alongside artists such as LIL DATA (PC MUSIC). UVTOWER performance has also been presented as part of a commission from the environmentally-conscious fashion label EDEN POWER CORP at SLAM JAM’s art space Spazio Maiocchi (Milano).

Giacomo Lepri is a musician, composer and PhD student at Center for Digital Music (C4DM) researching creative media and exploring new forms of art production through digital materials. His artworks and research have been presented in vanues such as Institute of Sonology - The Hague, ZKM - Karlsruhe, IEM - Graz, Ars Electronica - Linz, STEIM - Amsterdam, IRCAM - Paris, Guildhall School of Music - London, China Conservatory of Music - Beijing, MediaLab Prado - Madrid, Bauhaus University - Weimar.
Connect with Andrea Guidi and Giacomo Lepri
Become a member to post comments or questions to this maker.
The information and media presented for this project was provided by its creator. The maker owns and has copyright on all materials submitted. The maker retains all intellectual property rights, including copyright, patents, and registered designs.
The Maker Music Festival © 2018 -2021 • All Rights Reserved