Hope/Fear is an installation that uses live-streamed data from twitter to play melodies on singing bowls dependant on the mood of the world. If the world is more fearful the melodies will descend, if it is more hopeful, the melodies ascend.

The main brains of this installation is run on a Raspberry Pi, with a custom python script that streams twitter data and finds instances of the words hope or fear in every tweet, in real time.

The python script then sends information to a puredata patch which tracks the instances of each word and generates a midi melody based on the fearfulness or hopefulness of twitter as a whole.
The midi then gets sent through a DADA Machines Automat, which converts midi notes into electrical signals and drives an array of solenoids attached to piano hammers. These hammers strike a series of singing bowls of varying notes.

This project came about as an exploration of interactivity and data handling. It was interesting to see how these two opposing words trend and how Hope doesn't always have a positive connotation.

I have been exploring using data in music for a while now, and wanted to find a way to create melodies based on live information. This installation was made in order to have a melodic gauge of the general wellbeing of the planet, based on how hopeful or fearful everyone was.

This is one evolution of a series of twitter based instruments dating back to 2015.

My first twitter based instrument was showcased at the Tate Moderns turbine hall festival in 2015.

Not a lot! It runs off of a raspberry pi and uses a DADA machine automat kit to convert MIDI into electrical signals.

Yes, I have a bunch of different instruments that have been controlled by Twitter. Whether its live streamed data or whether you send a tweet to my account in order to trigger a series of musical inventions.
What did you wish you knew before you started this?

Before I started this series back in 2015 I didn't know how to code, so that would have been useful!
Are there plans available to make this? Do you sell this?

I had ideas to make mini, plug and play versions, but life got in the way.
Resoures? 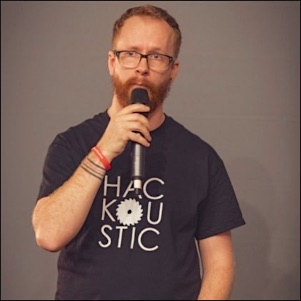 I have been making DIY instruments, interactive installations and sound art objects for 10+ years. I am also an educator and networker who loves bringing together new ideas and new people.


Connect with koTom
If you like this project, please make a small donation to the artist.