I made a system that creates virtual objects based on midi/OSC signals. These objects can be anything from particles to videogame elements. The possibilities are endless. 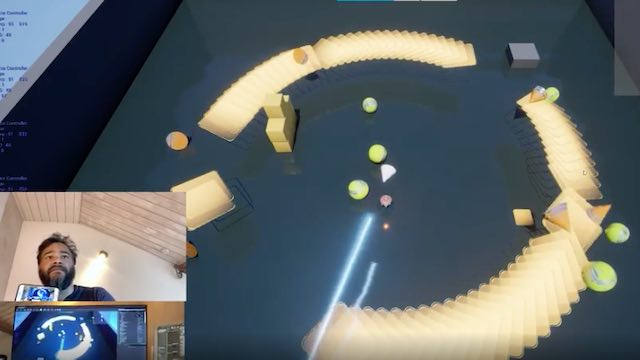 It's an UNREAL ENGINE* instance that creates actors based on MIDI or OSC signals.

I made it because I always loved good visuals with music. I spent hours looking at the winamp visualizer and always wondered how much of it was real reaction and if it wasn't completely random stuffs.

With this the answer is simple : 100%.
Playing a note on your midi keyboard (or drums, guitar, makey makey...) creates a visual effect.
As i'm using the best videogame engine (for realtime, awesome looking effects), I figured i could make a game out of it !

INTERACTION between the artists and their public is essential. Desiging something that allows spectators to be actors of the show, in realtime, IRL or over the internet, is an idea that I believe, would better humanity.

I made it in a couple weeks IIRC.

The video linked is an update I made, destined at Mr Beardyman himself, because he's one of the most hyperhuman cybermusicgeek that I could think of. (And the millions of buttons of the beardytron could trigger some Tripppppy things). Then pandemy happened; and it's pretty much stayed like that.

I reworked the game into a easier one for non-TPS gamers, and we had our times of fun ! (not shown in the video)


Sashi : Cybernetic Sculptor
I create with everything. Technical stuff and conscious minds.


Connect with Sashi
How I can help you:
This system can be used to animate backdrops at live events (IRL or ONL). Any artist could turn their music into beautiful 3D visuals / games.
They'd have to be tailored to fit the right universe, so I can :
- Create visuals with you. They can be used to produce standard videoclips, but with the right setup, you could use them in your live shows. (with screens, projectors, VR...)
- Help you setup your instance so it works with your setup.
- I can do pretty much anything.
How you can help me:
I would need to spend more time on this project to make it accessible and working easyly for other artists.

Donations would prove your interest for this to be a reality, and would help me support other artist that could collaborate on this.

IF YOU'RE AN ARTIST and you want to be a part of this, send me a message on my instagram (I know, there's completely different things on it).
If that inspires you, send me your visuals, game ideas, interaction ideas, music.

My hope is that I could afford to spend the time needed on the core while paying talented artists to produce interactive visuals (concept art, modelisation, niagara scripting, unreal blueprinting)

I would love to hear your feedback and meet talented, skillful people to ramp that baby up to speed!

It would be nice if some I.A. Experts in Unreal Engine would tag along, we could give a voice to the system !