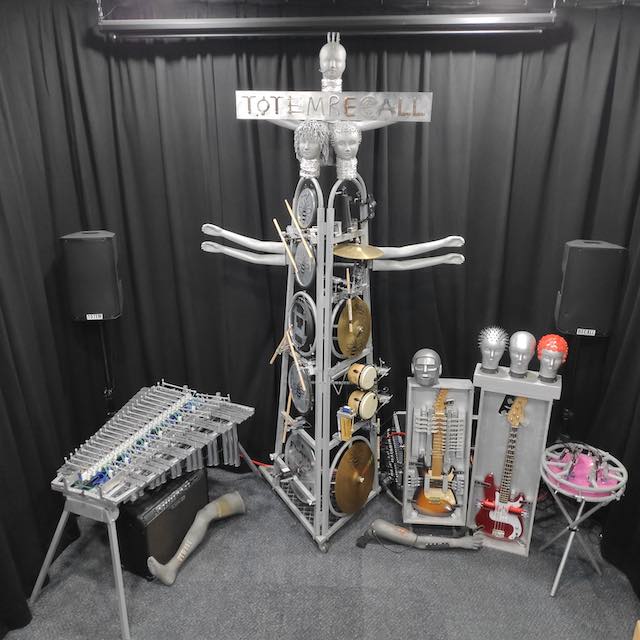 TotemRecall was initially started after a friend showed me a video of a mechanical drum machine and asked if I thought I could build something like it ?
Originally I just intended to use some solenoid actuated drum sticks clamped onto the edge of drums, but the school where I work asked me to dispose of an indoor metal climbing frame and the idea for the "Totem" was born !
The whole thing is controlled via standard Midi note data which is decoded into DC low voltage on/off signals which in turn activate relays to trigger the solenoids.
I use range of 12v solenoids from 500Ma up to huge 10A one for the kick drum, the reason for choosing 12vdc was that the whole system can be run from a 12v leisure battery and is portable.
Everything has been built by hand at weekends and in the evenings after work over the past four years using mainly second hand instruments and scrap materials, although I did take a year off to convert an old in ground swimming pool into my soundproof studio, because surprisingly my wife wouldn't let me keep a 11ft tall musical robot in the house !


Side story When I think back to the start of my Musical Robot building journey I seem to remember saying to myself " how hard can it be"...?
Nowadays I tell myself "if was easy, everyone would be doing it"...!
Everything takes five times as long as you would expect, because the part you need is out of stock or only affordable if you import it from China.
You will never have enough space because as soon as you get more you will immediately fill it.
Oh and your family will wonder who this strange person is that just comes in to eat food, sleep and keeps muttering the names of electronic components.
So is it worth it ?

The first time you switch on your creation and it actually works will blow your mind, it doesn't even matter if it sounds great, the fact you have created something with your bare hands and tiny human brain makes you feel like a God ! (maybe a little over exaggeration) but one thing is for sure, from that moment on you'll be hooked ;)

Perseverance is the name of the game though and don't forget it !

A friend showed me a video of a mechanical drum machine and asked if I thought I could build one ?
Foolishly I said yes !

I started the project 4 years ago but only working on it at occasional weekends and evenings.
I also took a year off in the middle to convert an old disused in ground swimming pool into my studio

I have always enjoyed making things even as a child, but this is a whole new field to me and was started from scratch 4 years ago

Will my wife be able to read this !!!
No seriously I have no idea of the actual cost as most of the stuff was second hand or scrap, although if I worked out how much I have spent on solenoids, relays, boards, connectors, cables and everything else that goes into build musical robots, I would say I have spent somewhere around £2k on the robots to date and probably another £6K on building the studio and gear ?

No this is a first for me, although now I've started I seem unable to stop !

The amount of trial and error that would be involved.
You are generally working in uncharted waters building things like this and no one has written a book yet telling you the right and wrong way to do things.

There are no plans available but I have considered writing some form of useful information archive for anyone that would like to attempt similar things.
I have also designed a unique single solenoid string plucker and dampener unit that can be 3d printed and might make this design available to others.

I have just finished building a robotic vibraphone (vibraphones are big) and now I am probably going to focus on building some small self contained flight case instruments that can be used to take into schools etc to try and encourage kids to get into building stuff ?

Tools I used to build TotemRecall included: Mig Welder, grinder, drills, Soldering iron, a good bench vice, table saw, chop saw and numerous hand tools.
Finding information is quite difficult for this sort of thing, but I did find myself watching videos on Youtube to try and see how some others had gone about doing things.
There weren't that many of us doing this sort of thing when I started 4 years ago although it seems to be getting more popular now. There are some really nice people out there that will welcome and encourage you with open arms, and believe me you'll need encouragement !
Notable mentions for me are the fantastic "Hackoustic" collective in London, and the brilliant "Moritz Simon Geist" who constantly astonishes me with his creativity ! 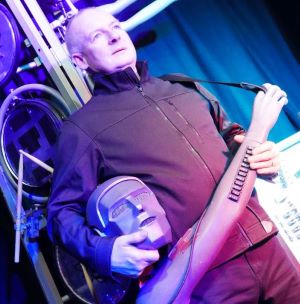 My Name is Darren, I'm 56 years old and live just East of Manchester UK with my wife and two sons.
I've loved making things all my life and I have always been intrigued by how thing actually work ?
Throughout the years I have designed and built lots of things, but nothing has been as interesting and addictive as building musical robots !
My musical background started in the 80's when I dabbled at being a hip-hop DJ and even built my own PA system before the scene dried up and I set up a home studio with Synth's and samplers. Once the family came along I lost interest in music and everything became about the kids so I didn't really miss it in my life, but even though my interest in creating music had dimmed the passion to make things never went away.
Interest in creating music was sparked again about 5 years ago and then shortly after that the idea of building a drum robot idea was planted by my friend, and let's face it the thought of building your very own drum robot is just too tempting not to pursue.
So now I still have no discernible music talent and can't actually play any instruments proficiently, but through these robotic creations can shred electric guitar like a pro, play superfast drum rolls and now apparently can even play vibraphone !
The best thing for me though about becoming a maker of musical robots, is the people and communities it has put me in touch with and the friendships I have made with other creators. It really is like an extended family, with the sharing of ideas and encouragement at its heart.


Connect with Darren Hesford
How I can help you:
I only do this as a hobby, but if anyone is building musical robots and thinks I might have some pointers to help them then I'm happy to share anything I have learned.
How you can help me:
If anyone is interested in what I do then please feel free to follow TotemRecall on Twitter, Instagram or Facebook.