The Doppler Machine is a sonic sculpture and performance piece that combines the Doppler effect with feedback to create atonal soundscapes. 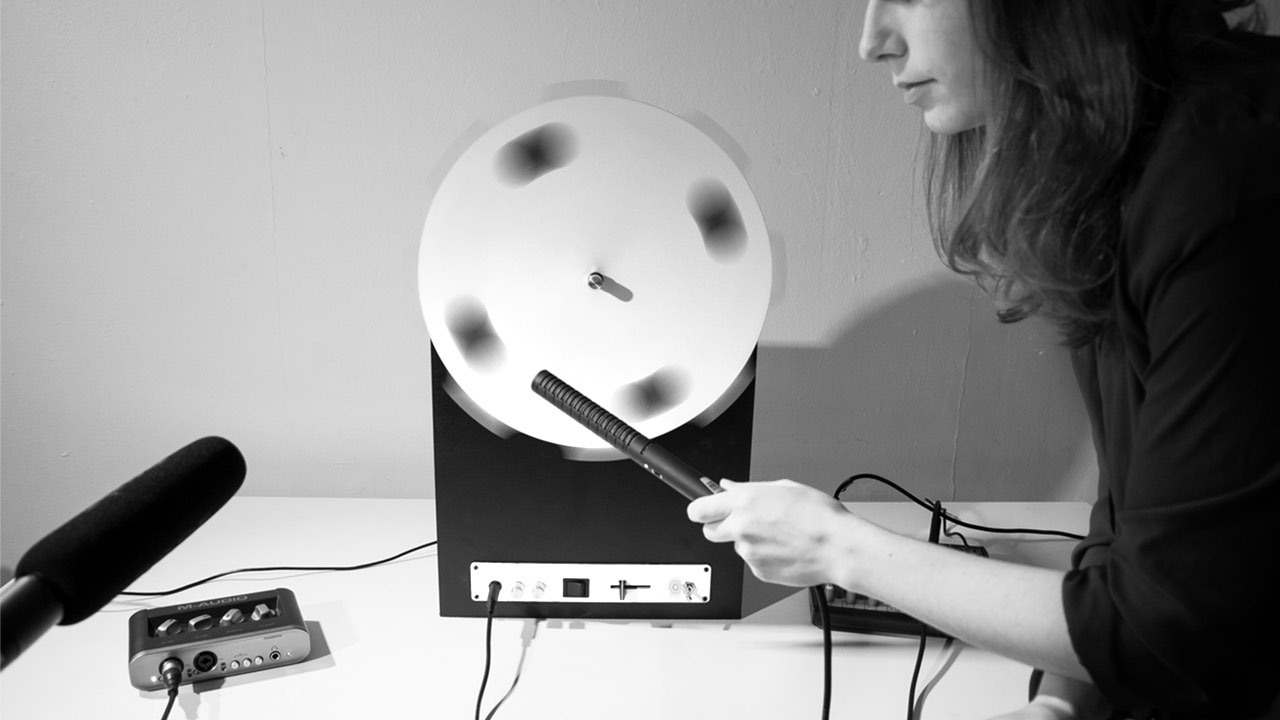 There are four speakers mounted onto the front of the disc, rotated by a DC motor. A lo-fi audio circuit sends the microphone signal through to the speakers, via a slip ring to keep the audio wires from tangling.

This piece was part of a collection of sound objects I made for my MA final show, where each object investigated various audio effects, to make these more tangible to the public.

I originally built this simply wanting to explore the Doppler effect in more detail, being inspired by Leslie speakers and analogue audio effects. It's really only after putting together a full working version that I thought of using this with a microphone input and creating feedback soundscapes. Design wise I'm quite influenced by minimal, but abstract designs like Luigi Russolo's Intonarumori.

It probably took a couple of months, on and off, but that was largely due to the research phase, sourcing the parts and reworking the design (e.g. finding the right balance between the weight of the disc and getting enough torque for the disc to still spin). The actual build is relatively straightforward.

This was one of my first builds, I've really only been working within sound art and installations for the last 5 years.

This was a fairly low cost build (around £100) for the version shown here. A large part of this is a lo-fi audio circuit (I used the LM386 audio chip) with just a few basic components, a DC motor to rotate the disc, an Arduino to send a constant PWM signal to the motor, and a bit of laser cutting.
Have you done other things like this?

I've made a version roughly double the size of the one in the video here, which creates even lower frequencies when used as a feedback instrument and some quite different feedback patterns. I do like the portability of the original, though.
What did you wish you knew before you started this?

I wish I already knew the term 'slip ring' – the essential component that keeps the wiring of the speakers from getting tangled when the disc rotates. I knew what I was looking for and was pretty certain there'd be something out there for this purpose, but it can be hard searching for what you need without having a name to go by. Then again, that's part of the joy of making, and discovering new things along the way. 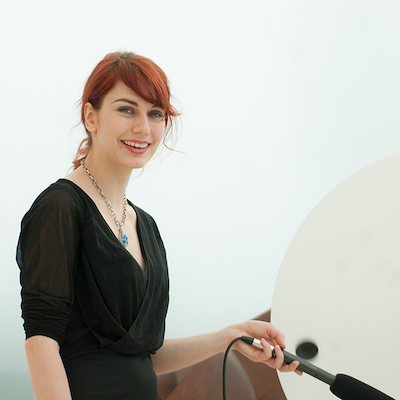 I've always had a love for music, but it's only during the last 5 years that I've got into electronics and have been building my own music tools.


Connect with Jen Haugan
How I can help you:
I've previously done performances with this piece at several London-based venues, from art venues like the RA and the Tate Modern to the Truman Brewery. If you're interested in hearing this in person once the pandemic calms further, or you want to know more about the build process, then feel free to reach out.

If you'd like to sample any of the recordings, feel free to download the .wavs from my soundcloud: http://soundcloud.com/cloudspires
How you can help me:
I've done a lot of my shows together with Hackoustic, a wonderful bunch of hackers and instrument builders. Join our community, and find out more here: http://hackoustic.org