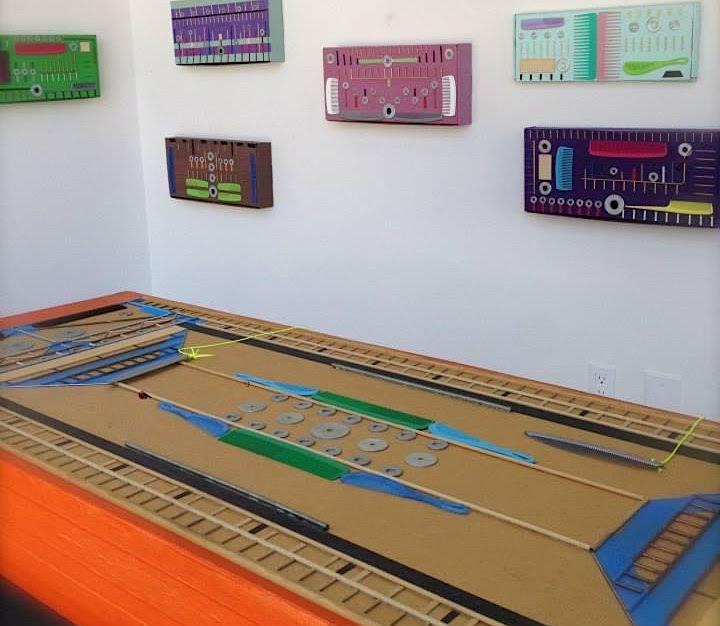 The Skatchboxes here are part of a series of painted Skatchboxes called “Paintboxes,” created between April 2013 and February 2014. The Skatchboxes are made of cardboard boxes that originally contained computer parts (larger boxes) or computer keyboards (smaller boxes). Various objects are glued to the surface of the box and played with specially shaped soft plastic combs. The sounds are amplified using contact microphones (piezo pickups) taped to the underside of the playing surface (inside the box).

Skatchplates are similar in the objects used and the use of pickups, but the body of the instrument has a flat triangular shape with open ends – the result of simply folding a single sheet of cardboard at two points. The small panel is made to fold under the playing surface for compact packing/carrying.


Tom Nunn : Designer of original musical instruments
Tom Nunn has designed, built and performed with original musical instruments since 1976, having received a B.Mus. and M.A. in music composition from the University of Texas at Austin and S.U.N.Y. Stony Brook, and post-graduate work at U.C. San Diego. His instruments typically feature commonly available materials, are sculptural in appearance, utilize contact microphones for amplification, and are designed specifically for improvisation with elements of ambiguity, unpredictability and nonlinearity.
Tom has performed extensively throughout the San Francisco Bay Area for nearly 40 years, as well as in other parts of the U.S., Canada, Europe, and New Zealand, both as soloist and with other musicians. Tom has performed with various groups over the years and currently works with T.D. SKATCHIT, RTD3, GHOST IN THE HOUSE and MUSIC FOR HARD TIMES. In 1998, he completed writing and self-published WISDOM OF THE IMPULSE: ON THE NATURE OF MUSICAL FREE IMPROVISATION (now available through Frog Peak Press), a book that examines various aspects of this illusive art and presents a theoretical foundation for creative listening, analysis and discussion. Tom has also written a number of articles about the use of experimental instruments and improvisation in publications such as EXPERIMENTAL MUSICAL INSTRUMENTS, MUSICWORKS and LEONARDO.