The project consists of an orchestra of robots which are controlled with a MIDI sequencer which allows them to synchronize. The final project will be a big Juke Box in which the robots will play songs to order!

This project is part of a more global industrial robot diversion project. Jean-Marie is a robotics engineer and he recovers old industrial robots to convert them into artistic projects. His most famous project is called "Le Bistromatik". It is an industrial robot (Nestor) which has been fixed on a mobile platform transformed into a bistro where the robot plays the role of bartender. Soon an industrial robot violinist (see other Maker Music Festival project) will join the orchestra. These robots works with pneumatics cylinders controlled by an industrial PLC which receives the orders from a MIDI sequencer via an Arduino 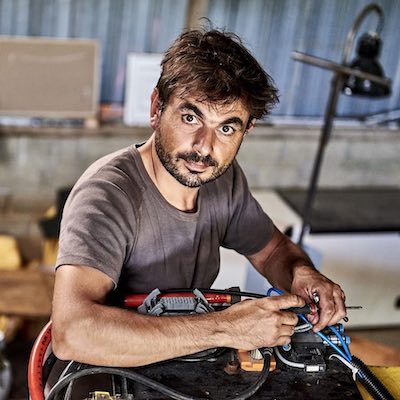 
Connect with Jean-Marie Ollivier
How I can help you:
This project allowed me to implement a MIDI interface between the world of automation and the world of music. If needed, I can share on this topic.
How you can help me:
I encounter slight lag problem when too much informations is received by the Arduino. I ask if the Arduino should not be replaced by a Raspberry PI. If anyone has any experience I will be happy to share.