Ekho is a modular musical robot that responds instantly to human voice overlaping it´s own sounds. 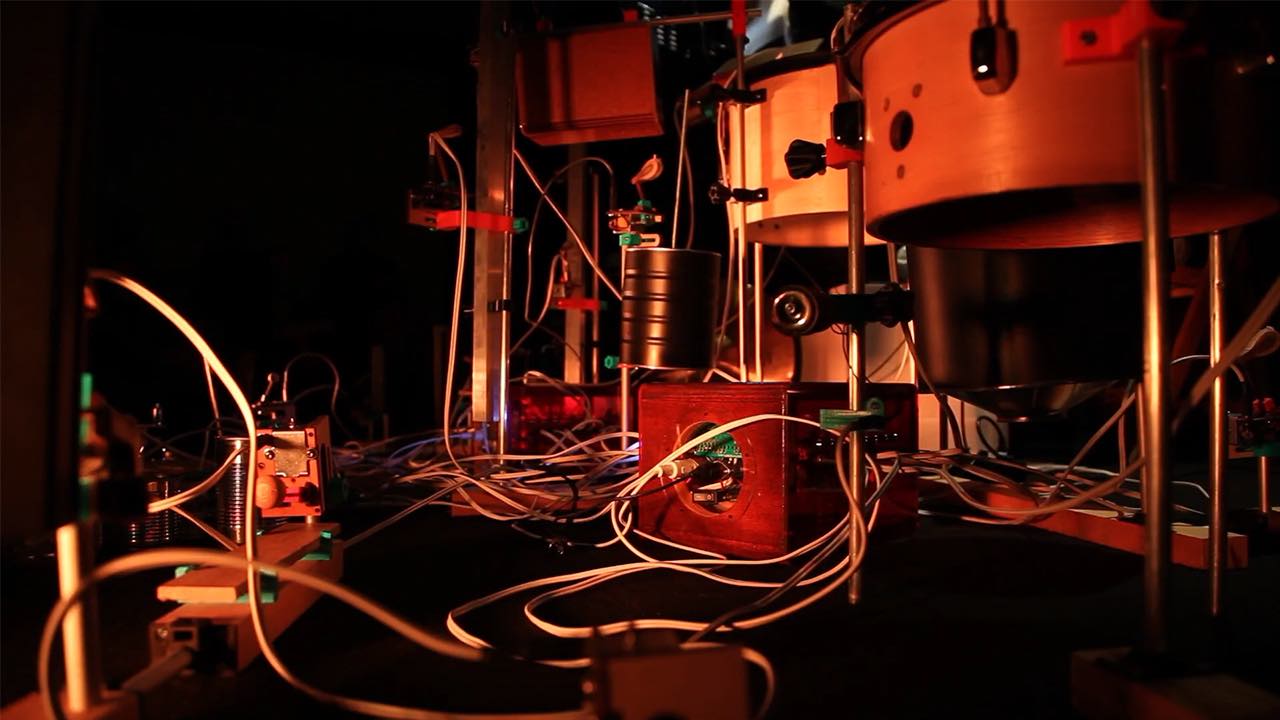 Ekho is a modular musical robot that responds instantly to human voice overlapping its own sounds. It is formed by 2 modules that are able to read midi notes and transform them in a total of 32 current outputs that drive different mechanical devices. A microphone connected to a laptop with a specific software is the part where the different natural notes and some pre-recorded sounds are transformed with very low latency into midi signals.

The whole construction is designed to fit in regular flight standards so I used many 3d printed parts, aluminium tubes, light wood, all easy to mount and dismount.

Ekho was built in Bilbao (Spain) and the first show was a collaboration with the Belgian singer Marianne Pousseur during the Ars Musica festival in Brussels in November 2021.


Side story This project began with the proposal to participate in the Ars Musica festival (Brussels) where I had previously performed with another musical automaton (see Rizomata). The festival team told me that the theme for the following year was the human voice and I soon began to figure out how to relate my work to that topic. When I found a way to directly relate the voice to a previous automaton (see polybrafón) I could see the potential of the project and decided to start designing a new one, more suitable for transportation. The director of the festival, Bruno Letort, suggested that I collaborate with Marianne Pousseur and create a 30-minute work, quite a challenge considering that we didn't know each other and we come from two different worlds, as well as living in different countries (Italy and Spain). During the construction process, the COVID19 crisis also arose and the original date was delayed to the following year, forcing us to adapt the creative process. We were trying to work remotely until finally we were able to travel and meet in person for only 3 days to create the play “Ekho's Punishment”, a cyborg reinterpretation of the Greek myth of Ekho.

Ekho has been designed with the following features:

- It is a modular and mutable system.
- It responds to voice (not only pitch!) with low latency.
- It's a light and transportable system in airplane suitcases.
Contains percussion, string and electromagnetic resonance modules.
- It works by MIDI so it is very flexible in terms of interconnectivity.

This project began with the proposal to participate in the Ars Musica festival (Brussels) The festival team told me that the theme for the following year was the human voice and I soon began to figure out how to relate my work to that topic. During the process, I heard about the Greek myth of Ekho and named it after it.

About 2 years, but I also made other instruments during the process.

Yes, I have a collection of round 200 self-made instruments of different complexity, but all important as a whole.

Learning is the fun part, how could I wish to miss that!

I never hide my information to anyone that asks, but making plans would be crazy and probably unuseful. I usually share this during my workshops

Starting to use the instrument with other performers and find out new improvements and adaptations. I would love to travel and collaborate with new people at their countries! 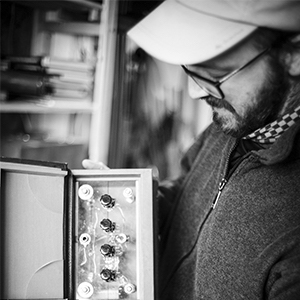 Jonathan García Lana / Tunipanea (Belgium, 1985) lives and works as an artist and craftsman in Bilbao (Spain), where he has had his studio since 2010. With a master's degree in Contemporary, Technological and Performative Art (UPV / EHU) he combines his area of artistic interest with other technical skills related to electronics, robotics, sound, traditional craft techniques and digital manufacturing techniques. His passion stems from a fascination for the phenomenon of sound ritual with a broad, multicultural and historical perspective but with an application in contemporary artistic projects. In the search to understand the relationship between human beings and sound, he specializes in investigating the great variety of expressive tools that we have developed throughout history, in the form of gadgets and mechanisms of incredible inventiveness. He designs and builds hybrid musical instruments mixing ideas, forms and resources of both traditional and contemporary origin, a practice that he likes to consider in the area of experimental luthiery.
Most of his practical research leads to public activities in the form of events with live music, workshops and exhibitions. He also develops projects with an experimental structure, the
most important being LUTITEKA (active since 2019) with its unique program of activities and long-term development, which includes a loan system of experimental musical instruments.


Connect with Tunipanea
How I can help you:
I design and build experimental music instruments as a full time job for 12 years now, but my main income is not product oriented. I mainly offer workshops, live shows, artistic installations/collaborations and also like to start long term projects like Lutiteka, an experimental music instrument loan system I run since 2019 in Bilbao.

I enjoy traveling and sharing my knowledge!
How you can help me:
If you think there is a way to organize an event or activity in your country, I will be pleased to hear about it!