A band of spring steel is animated by a servo motor 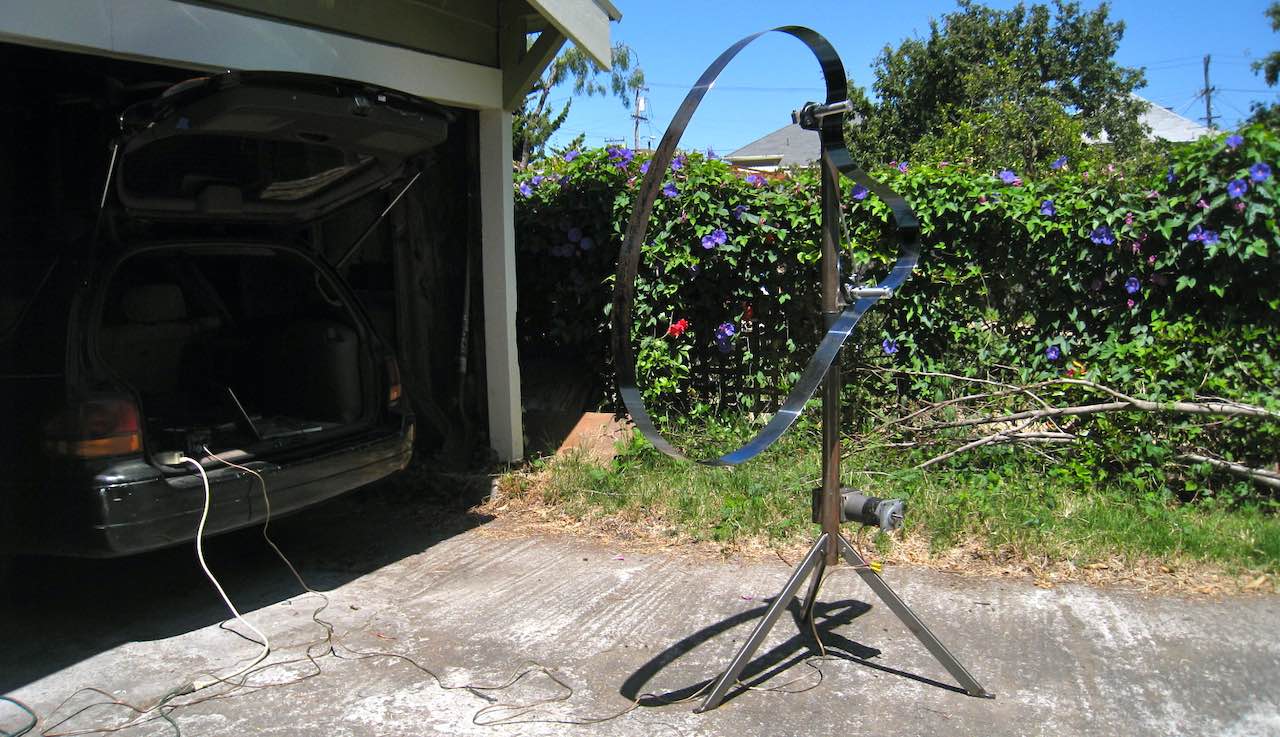 The Douser is a band of spring steel 2"x.025" about 5' long clamped onto 2 counter oscillating shafts driven by a single motor. The motor is variable speed, control signals are generated in MAX MSP and ported through a PAIA MIDI to CV converter.
I began working with this idea as a collaboration with Paul Drescher Ensemble and developed a couple larger versions for their performance of "Schick Machine". This Douser was left over from that development phase.
After fixing it up with new bearings and other parts I needed to figure out how to fit it into a large suitcase. By cutting it into smaller pieces and fabricating clamps to hold it together and buying the largest suitcase I could find on Craigslist it worked just fine.


I was invited to install small sound piece in the Electric Eclectics Festival in 2011. The EE Festival takes place on a farm 2 hours north of Toronto.
EE had been donated an 18' diameter fiberglass dome from a surround movie projection system. They placed this out in a wooded area on the farm the festival takes place on and I was to instal inside it. There was no electricity out there so I used car batteries with a phase converter. Lighting was provided by some LED flash lights


Side story Electric Eclectics Festival in Meaford Ontario Canada invited me to do a sound installation during the festival in 2011.
I had this development piece around from some instruments I built for the Paul Drescher Ensemble's theatrical production of "Schick Machine" in 2010. I fixed it up and modified it so it could fit into a large suitcase and I took it to Canada.
EE Festival takes place on a farm 2 hours north of Toronto every summer. They had obtained an 18' diameter fiberglass dome that had been used in a surround film projection system. The dome was placed out in a wooded area of the farm and I installed the Douser in it. I had to operate on batteries and a power inverter. It was a stand alone system with a motion detector that would start a MAX MSP patch when a person entered the dome. The MAX patch controlled the servo motor for 2-3 minutes

From experimenting with spring steel strips