uni-Poo
The uni-Poo: a circuit bent Tiger Electronics Poo-Chi robot dog from 2000, the motor of which is now CV controllable; the output of a RF pickup coil reading the staccato EMF emitting from the tiny motor provides a discordant alien servo soundscape. Utilizing an array of eurorack modules, optical and potentiometer control uni-Poo can be encouraged to make sequence-able noise. 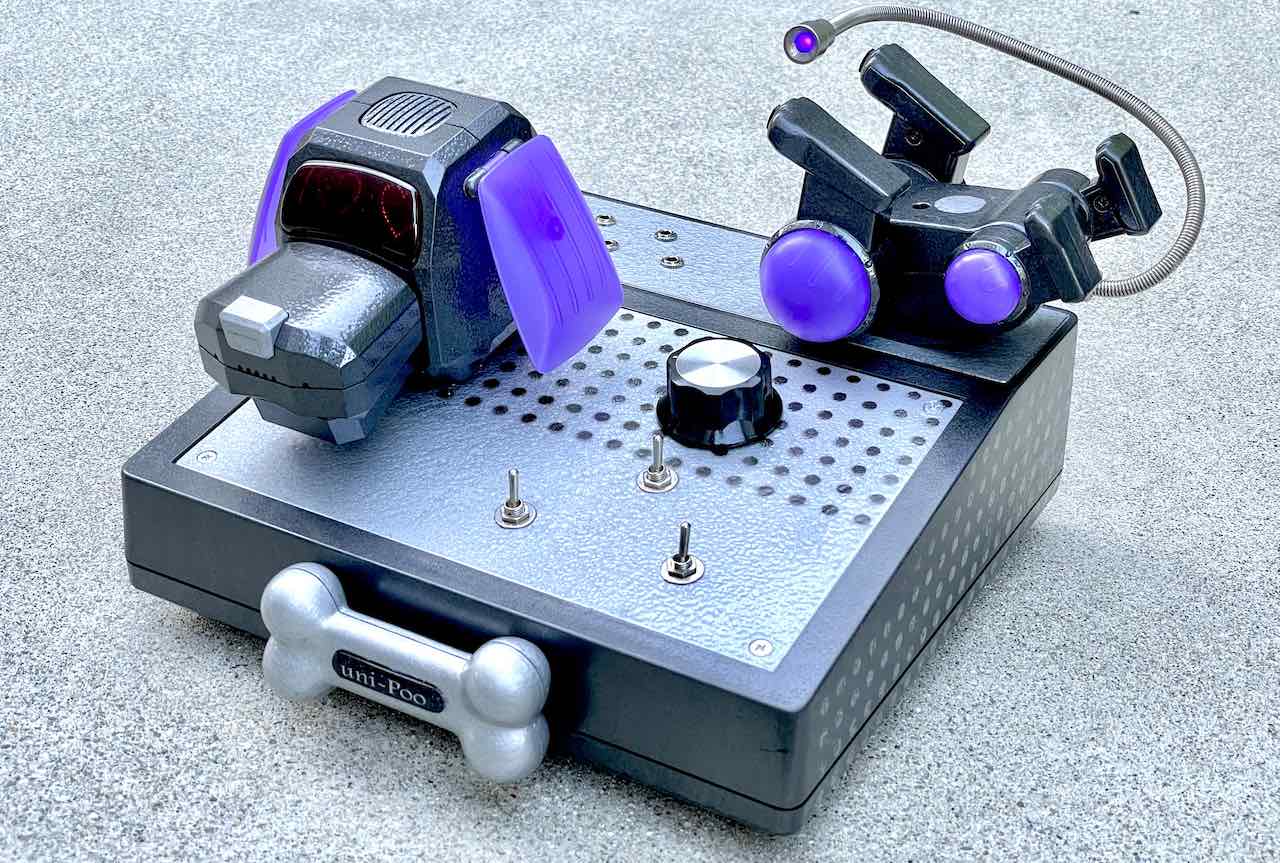 After poking through the circuit board of a Poo-Chi robot dog toy, a new instrument commission, exploring for any interesting circuit bent audio sounds and finding none, I began poking around the circuit with my modular synth, trying to find interesting places that may take CV control. I found several motor control points that responded to gates and oscillations, causing the motor to spit, sputter, whine and cavort.
I pulled a coil from an old modem, wired it up to a mini-jack (creating a RF pickup), and attached it to the motor to extract the EMF emissions, and discovered beautiful, strange alien servo-motor sounds that could be triggered and sequenced. I added additional optical and potentiometer control to the circuit for added flavorful noise manipulation.
I was especially excited about this gadget as I’d never seen another instrument, circuit bent or otherwise, that utilized RF exclusively as the output source.
I mounted the separated head and body in a sloped enclosure, engineered the motor assembly to attach to the body to retain disturbing inverted leg-wiggling, laid out the controls in an aesthetic manner, and uni-Poo became a full-fledged instrument.
Frequently Asked Questions
What inspired you to do this?

I've been building instruments and making noise with them, including making live visuals, since the late 1980's. I've been circuit bending audio and video gadgets since 1995.

Amazon for the sloped enclosure. eBay for the robot dog. Hardware store for paints. My large collection of fasteners (screws and nuts) for attaching things together (every tinkerer should scour garage sales for jars and collections of fasteners. You can never have enough variety). Several minijack outputs, potentiometer and knob, misc switches, optical resistor.
Soldering equipment, plumber's epoxy putty, wire and misc tools.
univac : TechDweeb

https://linktr.ee/univac
Connect with
How I can help you:
I do limited commissions of circuit bent instruments and circuit bent experimental visuals.
How you can help me:
Follow me on Instagram, check out my YouTubes, spread the word, give your favorite pet some love.
If you like this project, please make a small donation to the artist.
The Maker Music Festival © 2022 • All Rights Reserved