Circuit-bending Art Movement
It’s an honor for me to introduce to all of you Reed Ghazala, Father of Circuit Bending:

* He’s a multimedia artist: author, photographer, composer, musician.
* He has built experimental sculptural instruments for different renowned artists and companies.
* His works are part of the permanent collections of Guggenheim and Whitney museums, the Museum of Modern Art in New York, public galleries around the world, and private acquisitions.
* He has more than 60 albums released on cassette / CD.
* This building, GHAZALA, is named after him. 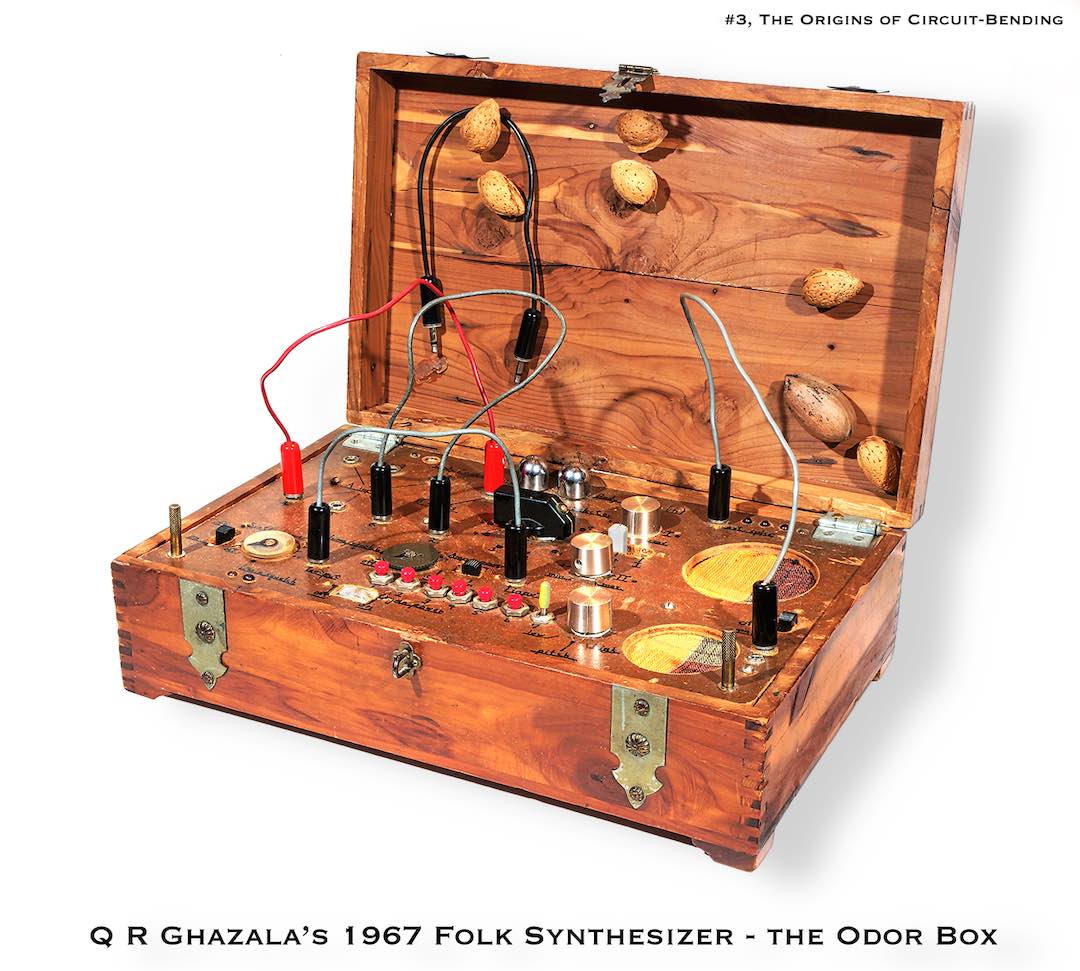 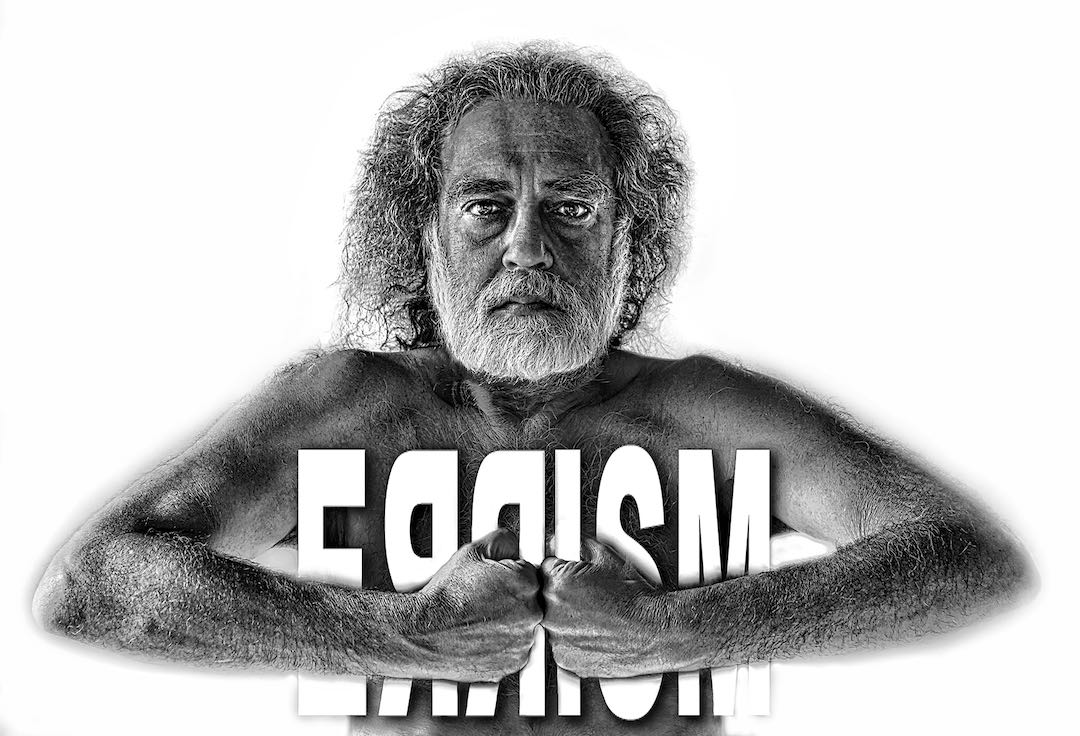 Qubais Reed Ghazala (Cincinnati, Ohio, 1953) was first instructed in painting, theatre, and classical piano as a young child (including preschool art courses at the nearby Cincinnati Art Academy, a school he would later attend as an adult).

At the age of five, Ghazala was exposed to his first experimental electronic music on the 45 RPM recording Omicron Visits Earth (by Rege Cordic and Company). Fascinated, Ghazala learned to drop the needle on the grooves containing the oscillator sound effects that began and ended both sides of the record. “I couldn’t get enough of it,” recalls Ghazala. That record is on his studio wall today.

The young Ghazala spent summers in New York’s Greenwich Village with his family. His mother, a public school teacher, photographer and artist, took him to the New York museums, including the MoMA where Ghazala attended a solar refraction exhibit impressing upon him the artistic power of light. He recalls these times as “scary-cool,” as he was allowed to roam the areas of the East Village, Chinatown, Washington Park, alone in the evenings (it would be here, at the Fusion Arts Gallery, 57 Stanton St., that Ghazala would first show his work as an adult in an exhibit with Red Spot, Shalom Neuman, Marc Sloan and others).

By the time Ghazala reached the age of twelve his interest had turned to experimental art (mazes, luminous painting, mirror assemblage, freezing liquids within expandable envelopes — gaining attention and winning awards in local exhibitions for his cubist sculptures and “Frank Lloyd Wright” house models –– he knew nothing about Wright or cubism).

Two years later, when Ghazala was fourteen, he would witness the sounds of a nine-volt mini-amplifier shorting-out in his desk drawer and find the sounds interesting. This event was highly influential, Ghazala would develop both instruments and theories based upon his conclusions, eventually naming his findings “circuit-bending” in technique, under the umbrella of what Ghazala terms errism.

Ghazala was soon expelled from Woodward Junior High School for refusing to dissect a living frog (to observe its beating heart); he happily abandoned formal schooling in favor of his interests, becoming self-taught in his fields. Quoting Ghazala, “I retired at fifteen and I’ve been happily working ever since.”

It was at that age, fifteen, in 1968, that Ghazala finished his first circuit-bent synthesizer, “ran away from home” and travelled with a group of vagabonds to Laguna Beach, California. There he lived out of their communal Frito Lay cookie truck, visited “The Haight,” hung out at The Doors beach house and body surfed in the Pacific until he ran out of cash and was arrested for vagrancy. Reed recalls finding himself jailed for being poor as, “a huge lesson in Americanism.”

Once out of prison, Ghazala returned to Ohio and his electronics with the culture-shock of California a positive force in the momentum of his art and music. Ironically, that same year Ghazala and his band would be attacked on stage for performing with Ghazala’s first circuit-bent synthesizer. Ghazala’s instrument would be destroyed in the brawl.

Ghazala would soon meet with Taj Mahal, Janis Joplin, drum for James Brown’s Charles Spurling, and witness the early performances of Thomas Owen Knight and Bitter Blood Street Theater, a psychedelic art troupe (Ghazala would later record a series of CDs with Owen and the band). It was during this period that Ghazala was exposed to Harry Partch, Penderecki, Cage, Subotnick, Xenakis and the Columbia - Princeton electronic music lab recordings. Reed would later meet with Penderecki and discuss their individual threnodies (Ghazala’s performed on his Vox Insecta insect song synthesizer).

Much of Ghazala’s art revolves around chance –– instrument design, musical composition, visual art; in 2009 Ghazala was honored as a founding member of MAMA –– The Movement of Aleatoric Modern Artists.

Ghazala is the author of numerous articles on electronics and experimental musical instruments (including the seminal 20-article circuit-bending series in Experimental Musical Instruments magazine, 1992–98). Ghazals’s book, “Circuit-Bending, Designing Your Own Alien Instruments,” (Wiley, 2005), the first book on circuit-bending, is considered the cornerstone of the movement and, now out of print, has become a recognized collector’s item.

Ghazala is one of the Web’s most influential cyber-professors ––
http://www.anti-theory.com/ was the first circuit-bending site in cyberspace, the pebble that tripped the avalanche of sites/instruments/music/teaching to follow. Ghazala also teaches in person via public workshops and one-on-one apprenticeship programs.

Ghazala has introduced numerous terms to the arts besides “circuit-bending.” Others include the coconut concept, clear illogic, the threshold of invention, errism, and BEAsape (standing for Bio-Electronic Audiosapian, the temporary “new” creature a musician becomes when body-contacting a bent instrument). Quoting Ghazala, “Neither instrument nor player stop at their ends anymore, biologically and electronically it is a new animal.”

Unlikely as it may sound, Ghazala has time-traveled as an adult, sung in unknown languages while asleep as a child, and communicated with spirits through a real-world angel. He has always studied, and seemingly mingled with, the mystic.

Ghazala gives public instrument demos, sponsors music and mushroom gatherings, bat and insect watches, agate hunts and unusual photography field trips. Ghazala’s discography (cassete, CD, vinyl) numbers over 60 releases. Ghazala explains the use of experimental sounds in musical composition, comparing it to the colors on a painter’s palette –– “Every sound, like every color, elicits an emotion. The rest is just construction.”

Ghazala’s work has been covered in much of the world’s major press (including, in the United States, the New York Times, the Wall Street Journal, the Washington Post, The Smithsonian, and WIRED); his work is kept in the permanent collections of The Museum of Modern Art, the Guggenheim, and the Whitney in New York City; he’s consultant for and his instruments have been designed for some of the planet’s best-known musicians including Peter Gabriel, Tom Waits, Towa Tei, Yann Tomita, Sri Chinmoy, the Rolling Stones, Blue Man Group, King Crimson, Kronos Quartet, Simon and Garfunkel, Peter Kember, Chris Cutler, Nine Inch Nails, Faust, Blur, and many others.

Ghazala’s circuit-bending technique is taught at MIT, Harvard and numerous colleges and high schools all over the world, circuit-bending workshops and concerts occur regularly at clubs, museums, galleries and Maker spaces. Reed ls considered to be one of the most influential working artists of the last three decades.

Ghazala is recognized as the father of circuit-bending and is credited with launching the first grassroots electronic art movement.
Connect with
The Maker Music Festival © 2022 • All Rights Reserved